Amazing, the amount of responses I got on my previous post, thank you all for your reactions! Apparently, a lot of people feel very strongly about the use of the use of “me” as a possessive pronoun. Some pointed out that this occurs more in spoken language, which is true of course, although many prefer to use m’n instead. I received one very interesting comment on how “me fiets” would be widly used in Surinam, wow, I did not know that! And some people got a bit too fanatic, calling eachother grammar nazi! Come on people, let’s get a life and not start insulting each other, shall we?

Anyway, I started to think about when I have corrected students, not just for linguistic reasons, but also for, let’s call the ugly beast by its name, associations of social class. A couple of years ago I was voluntering in a rough neighborhood in Amsterdam Noord, with many students who barely knew how to read or write. Naturally, progress was slow and it often felt like I had to do more social work than actually teaching. One Kurdish man in his 20s was the notable exception. He had a job at, I believe, a chicken factory, and was liked by his collegues. His Dutch improved dramatically and he was very determined to learn as much as he could, always trying to talk Dutch during the break as well. One day he mentioned how he liked to go “zuipen”. He even pronounced it with a heavy Amsterdam accent, “suipuh”! I hesitated for a bit, because many people do speak like that,  but eventually decided to correct him: zuipen really means to drink [too] much alcohol, otherwise he should say ”drinken”.

Was I correct? “Suipuh”is what he had learned from his collegues, and within this context, what he just said was totally appropriate with his buddies from work. However, what if one day he would have to meet, say, his future father in law over a cup of tea? There, zuipen would be widely inappropriate, even offensive. How can a language instructor know where and how the student will eventually speak Dutch? What if this Kurdish guy was not planning on working in the chicken factory for the rest of his life, but aspired to a more middle class lifestyle? Who am I to judge what he should or should not learn? 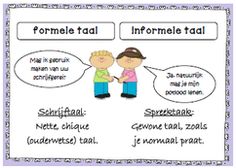 Linguists speak about language registers, what might be correct in one situation can be completely incorrect in another. As a second language speaker, it is incredibly difficult to grasp all these nuances. I am completely fluent in both English and Spanish, but tend to avoid words and expressions that are too colloquial. I love slang and regionalisms, it is what gives color and flavor to a language, but I know will never get all those delicate nuances right….

So that is why I recommend students stick to a more formal use of language when they speak. What do you think?